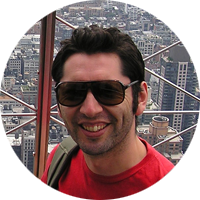 As a sequential art enthusiast, it wasn’t hard to work out that Marcelo Baez would not be spending a career in brain surgery. Trained as a graphic designer, he would always have one eye on his first love comics and illustration!

Currently he is working on a strange greek myth graphic novel and a post-apocalyptic movie/comics crossover!

Marcelo is represented in the US by Shannon Associates New York